From Scriptel Wiki
Jump to navigation Jump to search

Scriptel Corporation was founded in 1982 and is based in Columbus, Ohio. The company quickly became the industry leader in digitizer components and electronic signature capture. In the late 80’s, Scriptel launched the PenWriter, the first computer peripheral that provided high quality pen input on a device with its own LCD display. For the first time, this allowed users to see and use their own handwriting on their computers.

Today, Scriptel Corporation is the leader in capacitive pen digitizing technology, a very durable and cost-effective way to electronically simulate pen and paper. The company holds many patents and has deployed its technology in over 3 million solutions used around the world, mostly in the demanding retail point-of-sale environment. Virtually everyone that used a credit card at major US retailers in the past decade has used a Scriptel pen many times.

Beginning in 2010, Scriptel entered the digital workflow market with the ScripTouch ST1500, a dedicated electronic signature pad that provides high reliability with 3 year warranty, and has since launched a full line of ScripTouch signature pads that meet important market needs, backing these up with excellent service and software integration support.

In the summer of 2015, Scriptel achieved an important milestone. It launched its second generation EasyScript interface that adds signature data streaming and higher resolution for a better user experience to its highly successful "no client install" API for browser-based applications. 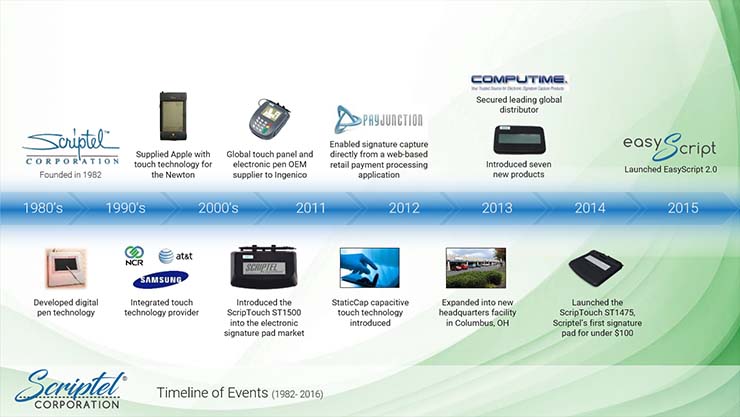